The plague is nearly gone, but has still not completely left my body. It lingers in the form of an obnoxious cough. In unrelated news, a rainbow appeared in a Wal-Mart parking lot.

An exciting surprise at work was this mushroom that grew in my flower pot.  It remained there all week.  I wonder if he’ll still be there on Monday.

A summer meal I prepared for the first day of summer.  My mom and sister came to help us eat it.
This week I was caught by complete surprise when an opportunity fell into my lap and turned everything upside down.
A strange thing when distant dreams never thought possible, suddenly can become a reality.. But is it something I really want?  Or was it something that was just entertaining to imagine?  Either way, everything has been turned upside down. Only time will tell what happens.
Category: Weekly Journal 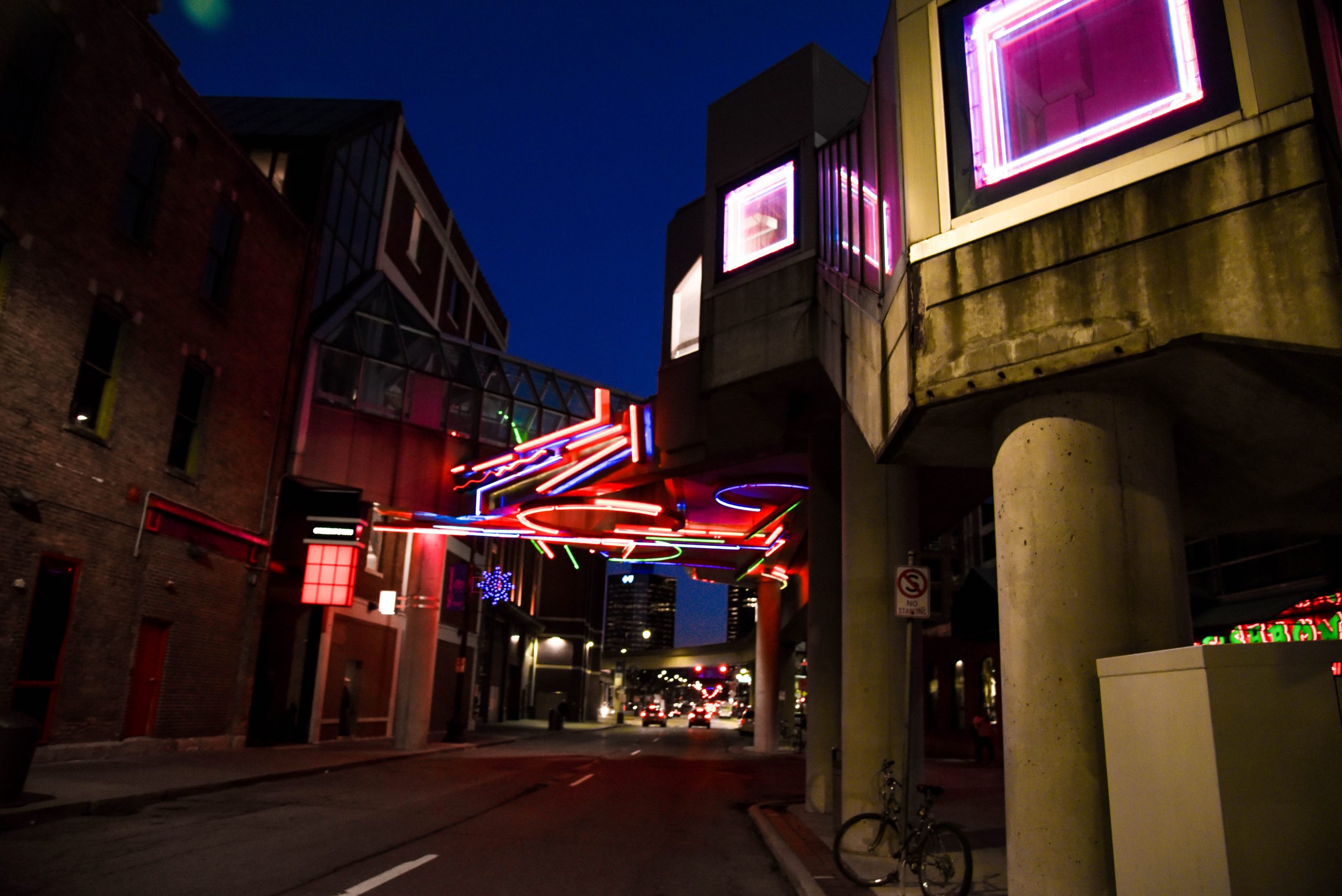 A frigid late November night in Detroit Michigan. We rode the People Mover around and around, taking in the city sights as the sun set.
Hungry for food, we stepped off the train car at the Greektown exit and headed toward the faint glow of pink and blue.

Bright neon lights in the cold winter night, led us down the winding concrete stairs to the loud festive streets of Greektown.
The lights illuminated the walkway, some flickered and gave off a low hum of electricity. It felt a little like being in an alternate universe.

Another corner of Detroit, overflowing with character.

We sat in a Greek restaurant, devouring delicious food and reminiscing on the fun we had that day, wandering our homeland.

Not wanting to use my precious time off as sick time, I stuffed myself with cold medicine and attempted to go to work. But after suffering a few embarrassing coughing fits and an instance where my face leaked from multiple regions, I grabbed my work computer and quarantined myself at home, where I traded my coworkers for cats.
Funny, because I had chosen this week to be “Health Week”.
I was going to exercise every day. I was going to eat really healthy.  But instead I had the plague and spent each night laying on the couch binge watching a funny TV show and stuffing myself with who knows what kind of food.

In other news, My hydrangea is blooming. And my best friend and I are planning another trip to New York City, which fits in perfectly with my habit of getting sick every time I’m about to fly somewhere. 🙂
Category: Weekly Journal

Somewhere along the Blue Ridge Parkway, a little south of Asheville, is a meadow called Graveyard Fields.
There isn’t a gravestone in sight though.
The name came from a vast amount of trees that had been snapped in half during a violent storm and then resembled graves.
But that was many many years ago.

The trees have returned.

Much of the path though the woods is led by a winding wooden boardwalk.  Other parts are more like semi dried up mudslides that forced us to make our own little side paths to avoid getting trapped in the mud.

It was a sunny day, after rain had been falling for weeks, but dark clouds were still swirling around the skies. A reminder that the storms weren’t over yet.

We continued down the scenic trail hoping to reach the upper waterfall, but the signs were not marked well and somehow we ended up back at the parking lot without ever seeing the big waterfall.

Along the trail these little red blooms caught my eye. They had sprouted up from some lichens growing on a rock. I’ve never seen lichens bloom before so it was an exciting find!
Graveyard Fields is now at the top of my “Favorite Places on the Blue Ridge” list.
Categories: Asheville, Blue Ridge Parkway, Graveyard Fields, Hiking, Mountain, Mountains, North Carolina
Tags: Blue Ridge, Mountians, Travel
It’s time to bring back the blogging aspect of my blog!

The house is finally painted, the windows are replaced and the shutters are gone! It’s hard to believe the house finally looks like what we have been envisioning for all these years.

The cats did great during the remodel! The boys have a history of freaking out and turning against each other during times like this. But they kept their cool and were even pretty excited about the crates we got for them. They were crated because last time work was done on the house the workers opened the door to the room the cats were in, despite our warnings and the signs on the door that read “DO NOT OPEN, CATS INSIDE, and the cats nearly escaped for good!

We managed to take a break during the construction period and venture out to Asheville to see my favorite band Ghost. I’d never been to a concert before and never had much interest to ever go to one, but I couldn’t resist seeing these guys when they came to town. It was quite a spectacle  and as soon as it was over I wanted to see it again! I also randomly got chosen to go up on stage as a character in part of the show but because of a communication issue they had already chosen someone else. Boo!

The day after the concert  was spent exploring new places on the Blue Ridge Parkway. A fun way to spend a Wednesday.

One of my favorite weeks at work is the Regenerative Medicine Essentials course, where it’s a week of lectures, teaching workshops, free breakfast, lunch and sometimes dinner.  It also means getting to explore these newly renovated buildings downtown. Listening to the interesting lectures reminds me I’m glad I ended up in this field of work.