Cloud sat posed next to the bouquet of flowers, with a look on her face like she demanded her photo be taken. 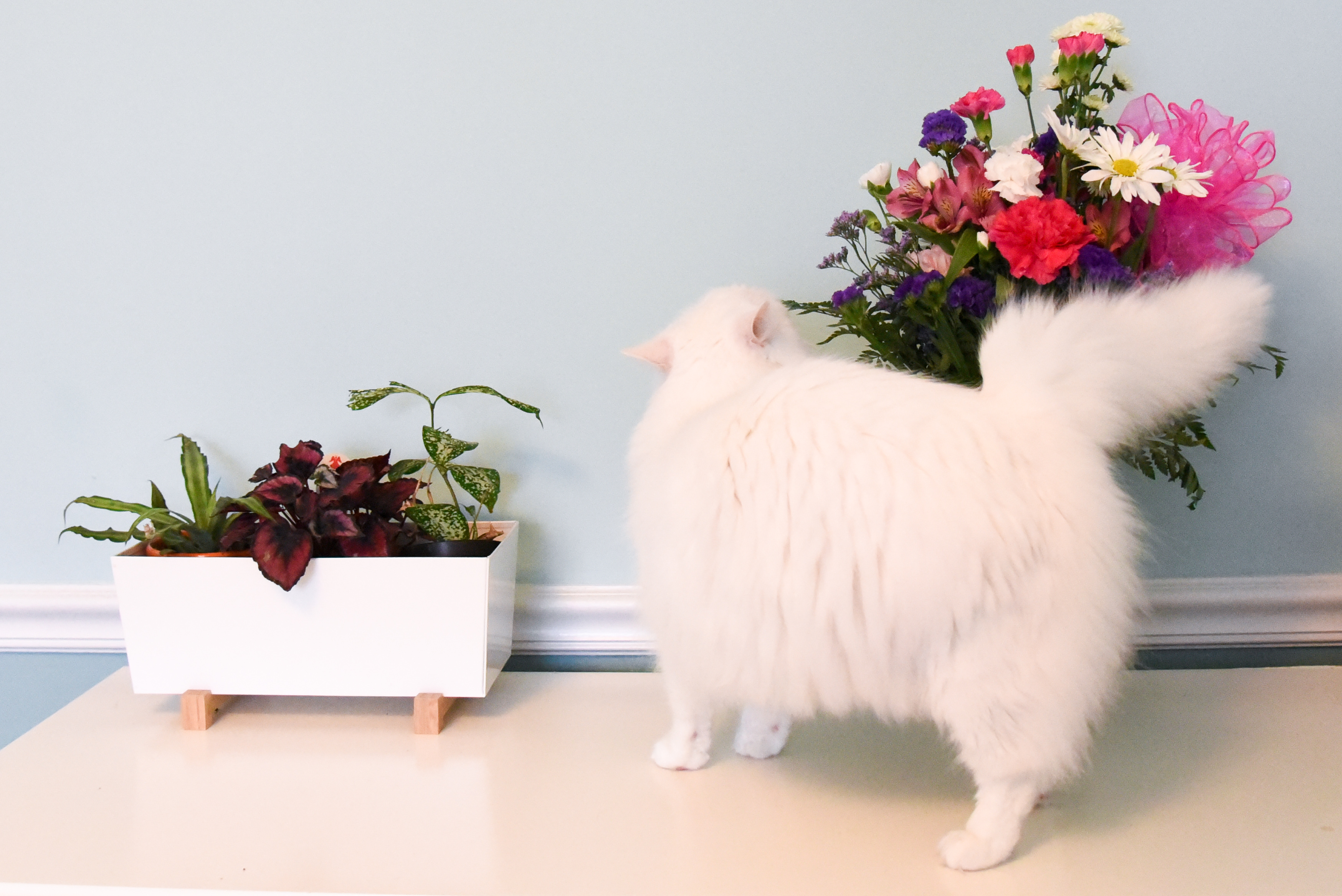 It’s good to stop and admire the flowers sometimes!

October first is Cloud Day!  Six years ago she ran in our house and refused to leave. She decided it was her house! 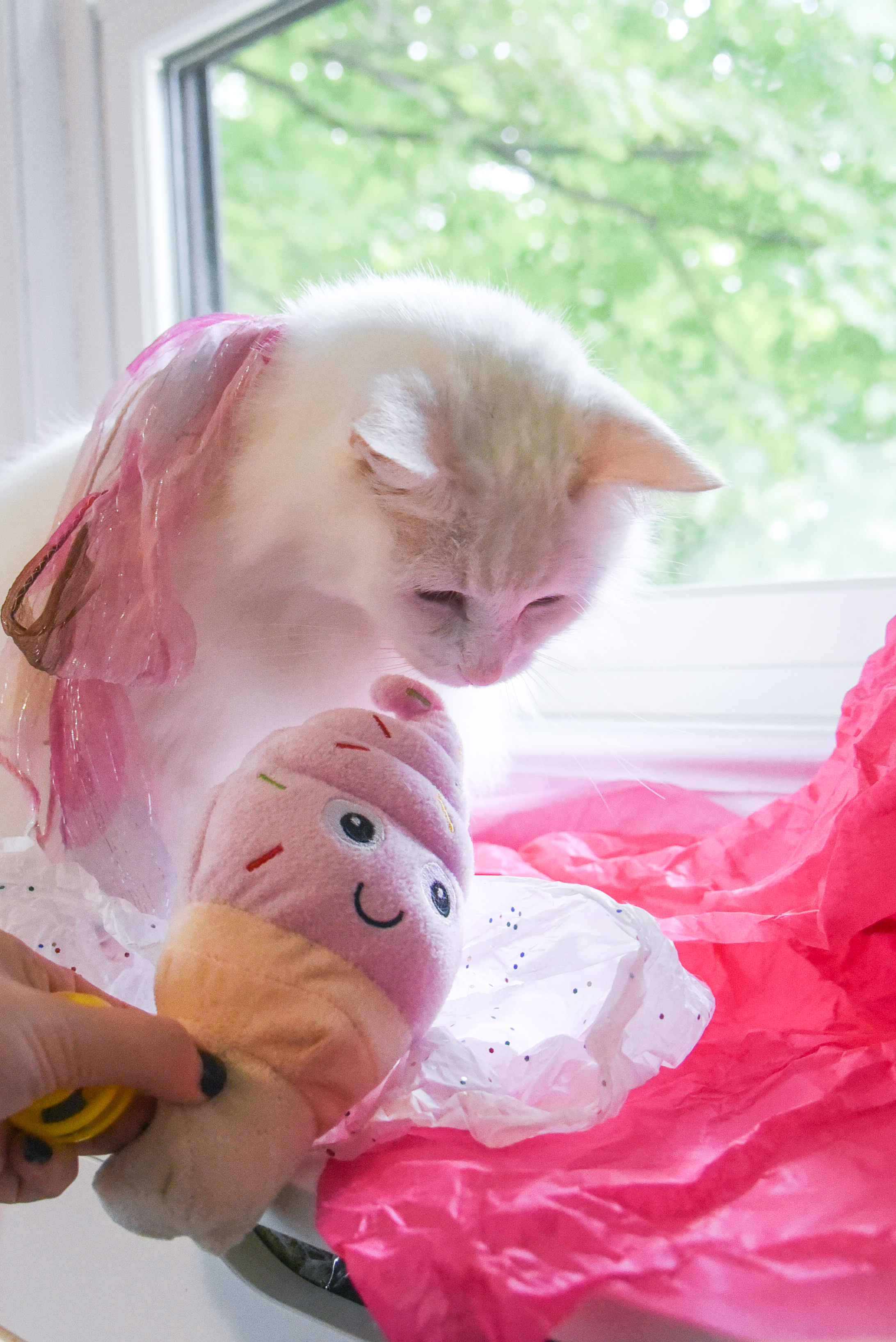 She was just a sad starving little cat when she came here, but now she’s a happy, fluffy, very well fed cat who was happy to have an ice cream birthday toy! 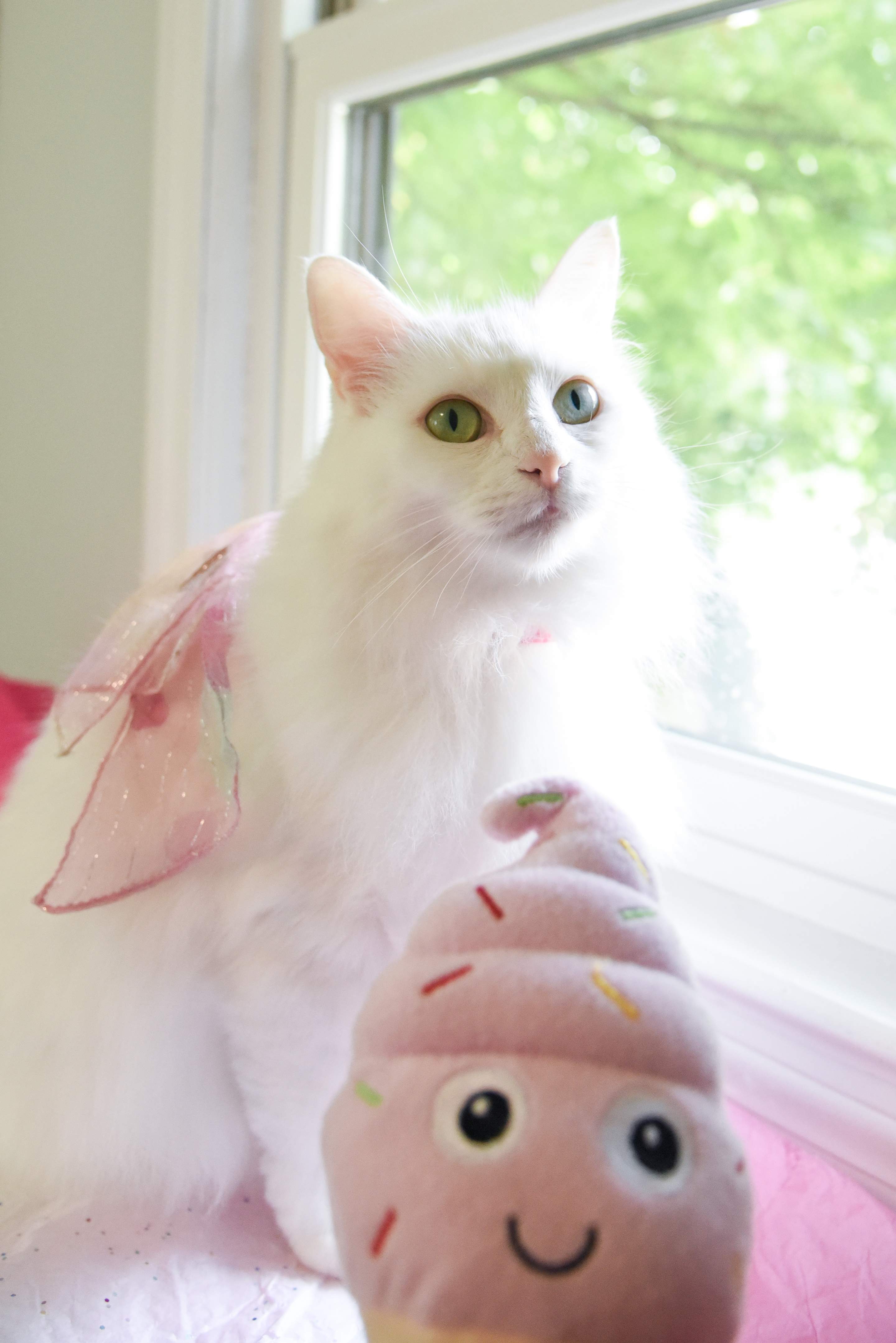 She likes to bend her tail at weird angles. Not really sure how it works.. 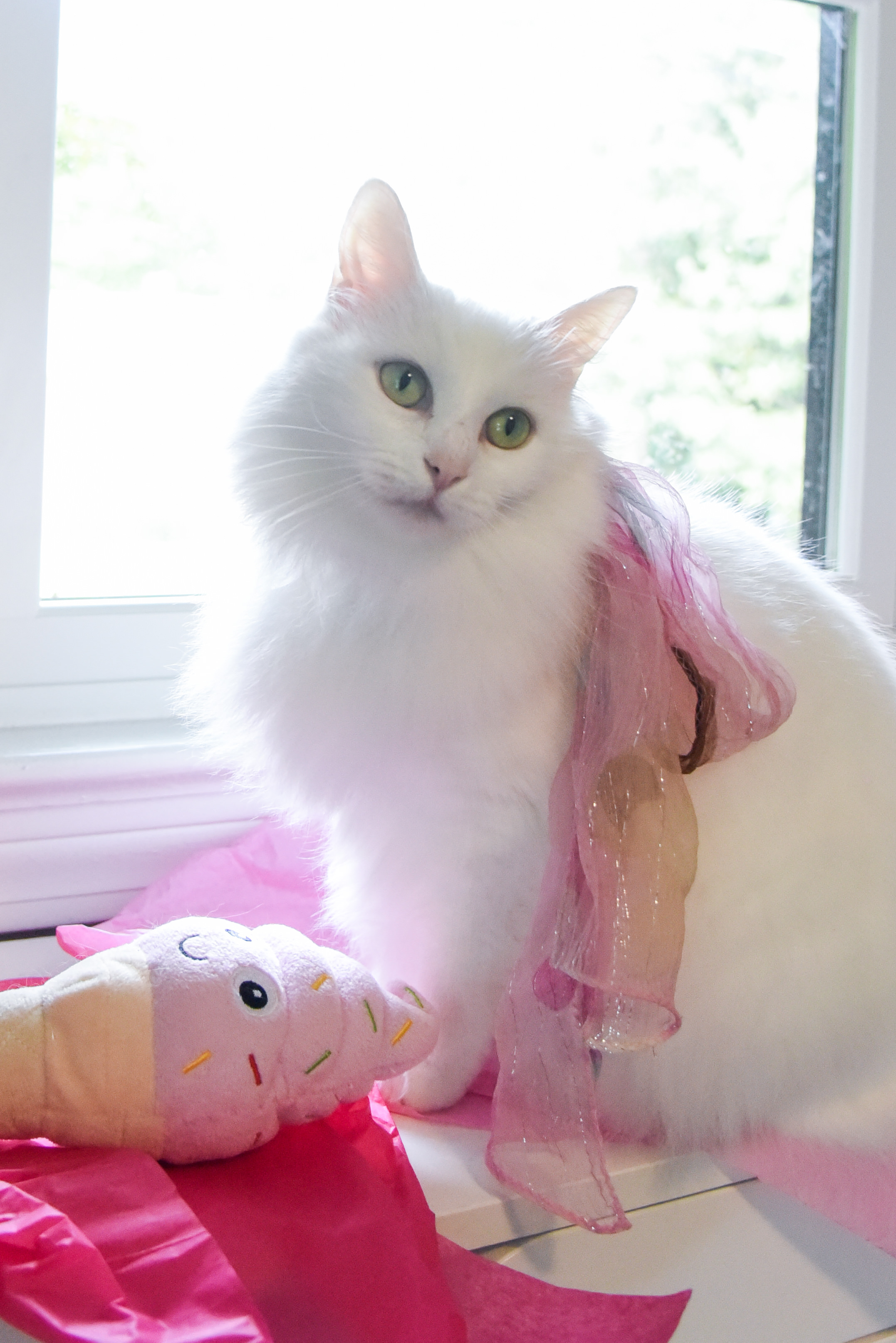 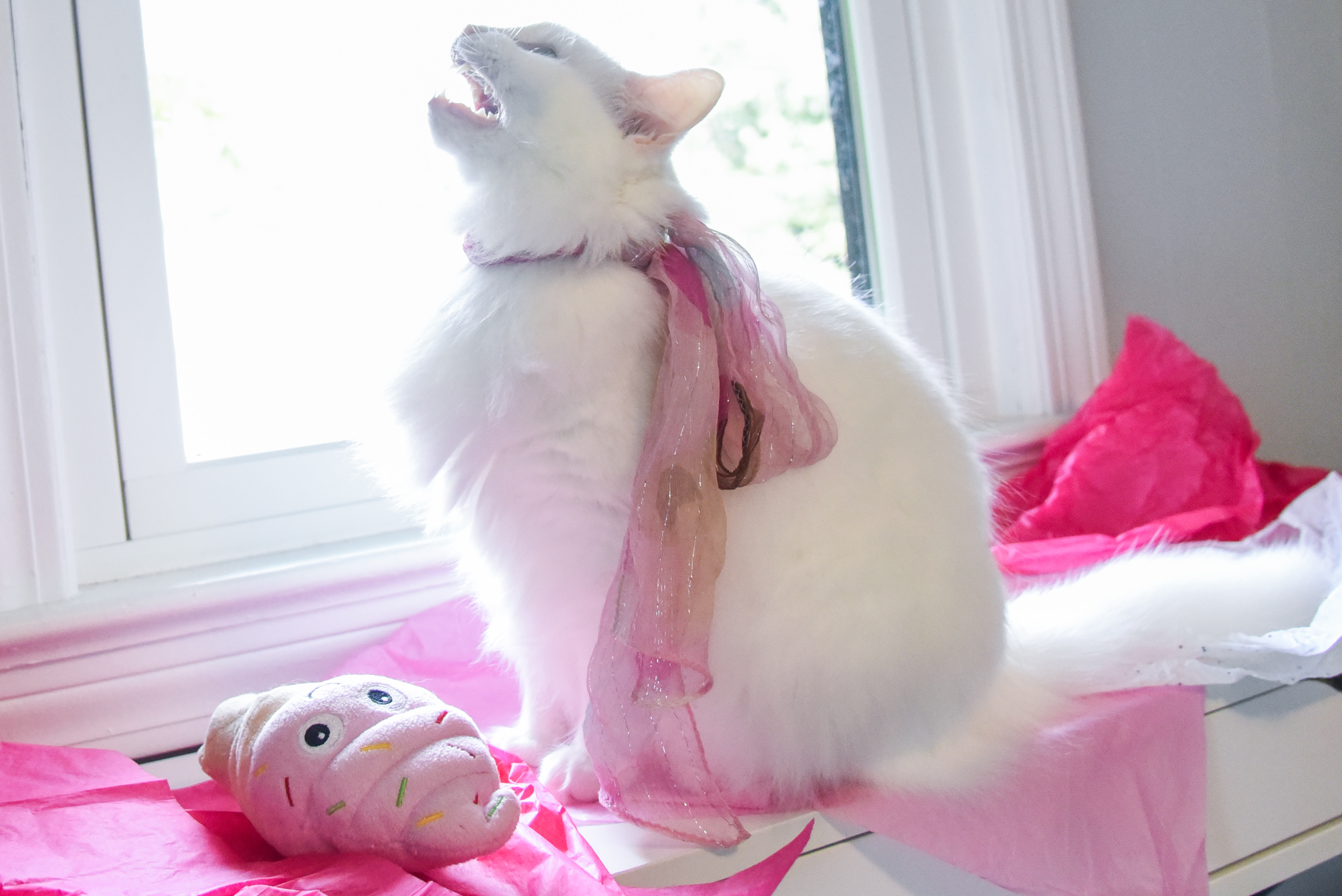 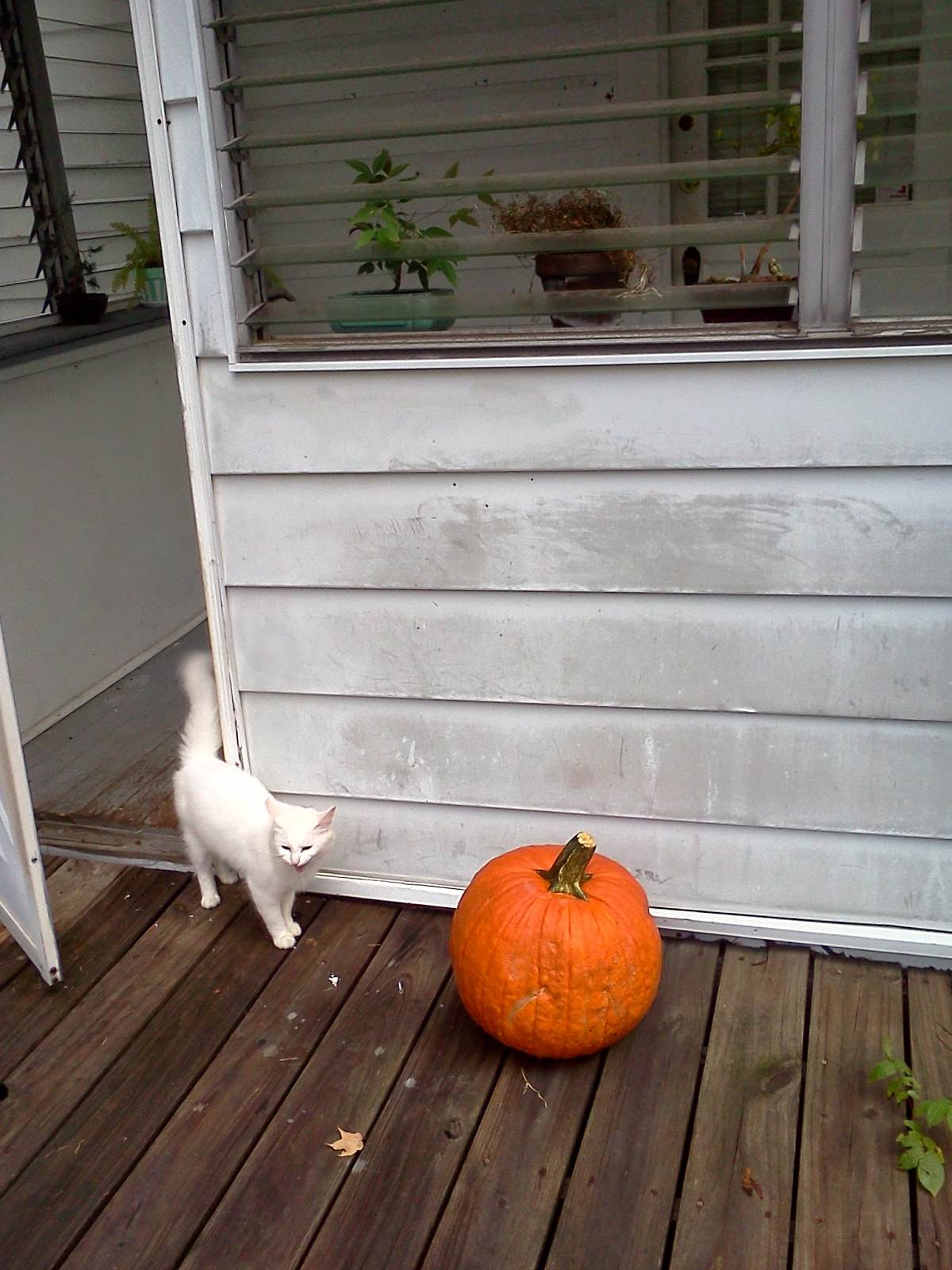 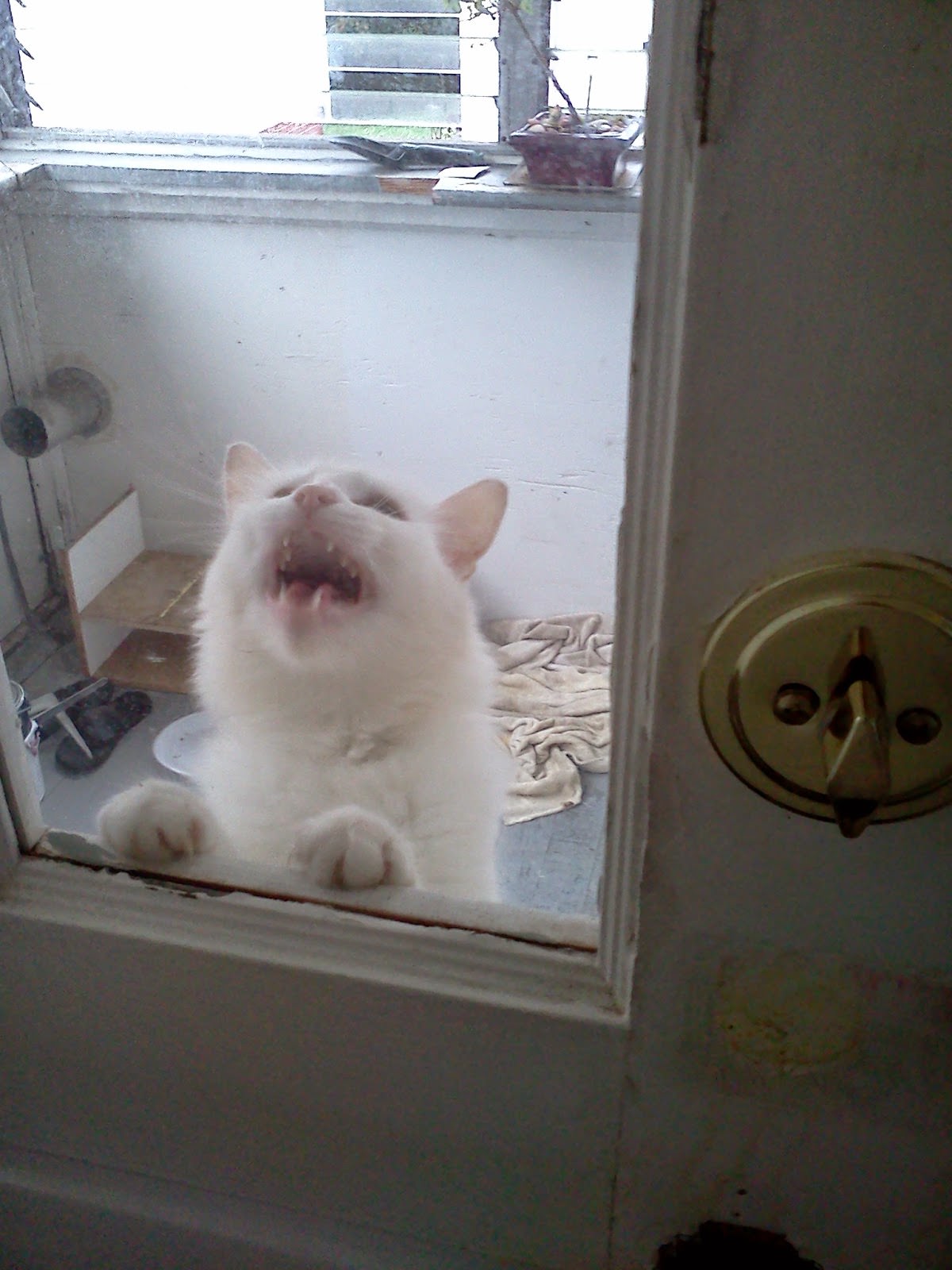 These are from when she first showed up. She did not like it when I put her back outside when she initially came in! 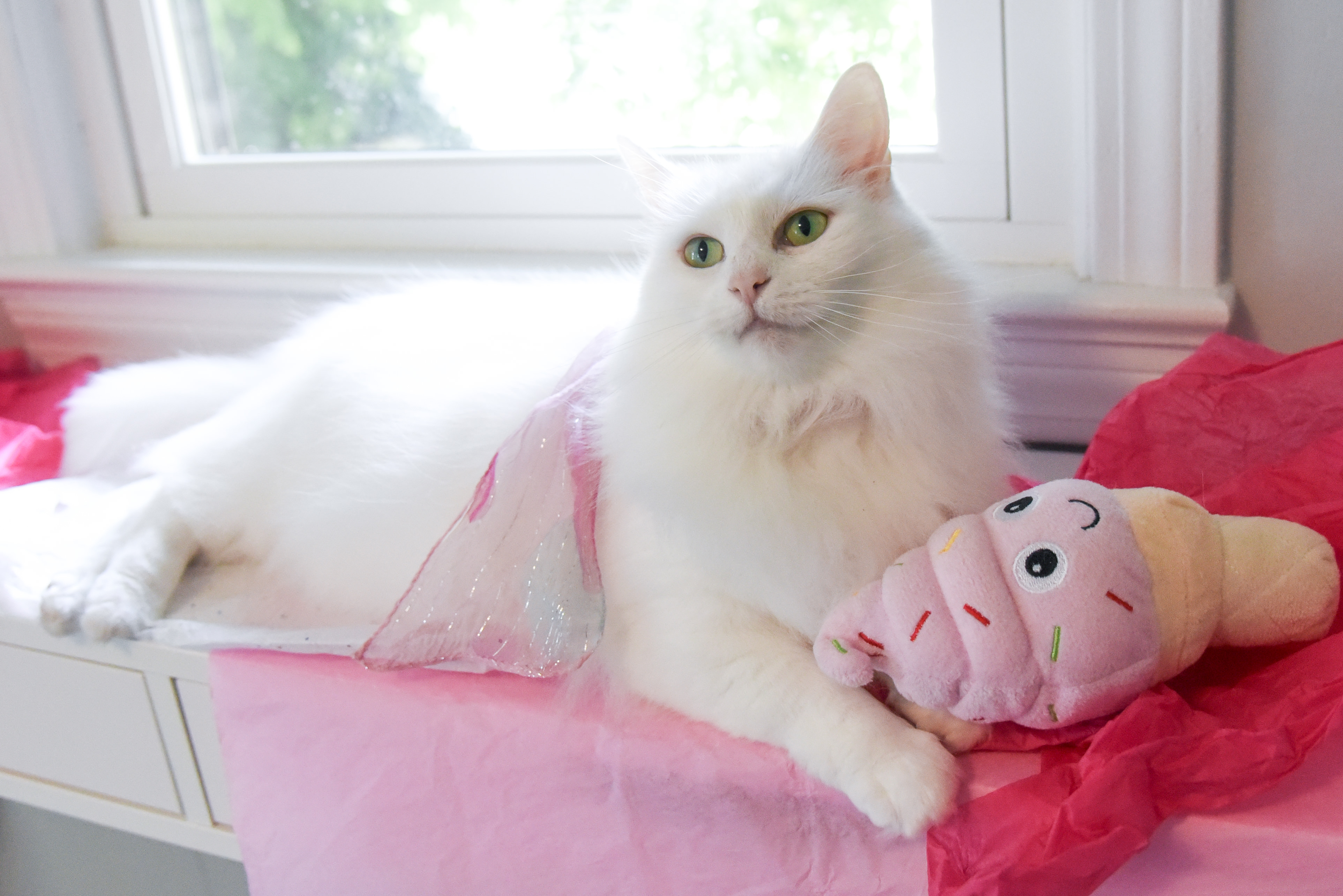 Cloud is a great cat!

She was very friendly. So friendly in fact, that she raced inside the house and jumped on our bed and made herself at home!

We had just moved into our house, and decided that in the month of October, we would get a cat. Well, Cloud showed up on October first!

What fun!  I had Steven take a photo of me and our cat visitor because I was sure that she would go back to where ever she came from and I’d never see her again. She had to belong to somebody, she was too friendly not to!

But, when I looked outside the next morning, here’s what greeted me! She couldn’t stand not being in our house and screamed at the door if I put her out.
We went around the neighborhood asking about her, but no one claimed her. So.. We kept her!

Our new bundle of joy!
Only problem was; we had just picked out Chester and Jeeves a few days before, and were going to bring them home the next day! Three cats seemed like a lot, so we didn’t plan on keeping Cloud. But after having her for a few weeks, we couldn’t imagine getting rid of her!

Before she grew her fluff, she looked like a little boy! This picture makes me laugh whenever I see it.

She was so happy with her new home.

I can’t believe this crazy cat chose our house to live in!

Like Loading...
Two years ago today, we came home from a grocery shopping trip and a white cat was waiting on our back porch to greet us.

As soon as we opened the door, she raced inside our house, ran into the bedroom, jumped on the bed and made herself at home!

She was so friendly I figured she must already have a home, so we let her hang out with us for a bit before putting her back outside. I figured she’d go back to her home and I wouldn’t see her again, so I took this picture to remember her by. Haha.

Buuut…  This is what I woke up to the next morning. She was hanging by her claws at the back door screaming to come in! I had to go to work so I didn’t let her inside, but when I got home she was patiently waiting on the back porch. We walked around the neighborhood to try and find out if she had a home but no one claimed her. One neighbor even said he had seen a liter of white kittens hanging out near his yard months earlier and they didn’t seem to belong to anyone. Then I remembered something; before we moved into our house, Steven was driving home one night from my parents house and said he saw a white cat hanging out on our front steps, he called her Ghost, because she looked like a tiny ghost in the dark of the night. Then a little while after that I had seen a white cat coming in and out of the sewer near our house, had it been her?  No one ever claimed her so we let her move in! We called her Ghost at first, but Cloud just seemed like a better fit.

When my aunt heard the news, she dropped off a present for our little bundle of joy. Inside the package were some toy mice which became her favorite toys. She still carries them around and yowls to them.

I couldn’t believe this cat had moved in like that.  The funny thing was, we decided that October was the month we were going to pick out a cat, I was so excited, I kept saying it was cat month. It’s almost like she knew, because she showed up on October first!  But, what she didn’t know is that we couldn’t wait until “cat month” to pick out a cat, and a few days before we had met a lady selling kittens at petsmart and had already picked out Chester and Jeeves! We had plans to take them home later that week!

We weren’t sure what to do with Cloud, we weren’t sure we could handle having three cats, since our original plane was to have ONE cat, but the lady at petsmart talked us into getting two. Even though we hadn’t picked up Chester and Jeeves yet, we still felt like we couldn’t NOT get them.  For a while we planned to give her to Steven’s aunt who had been wanting a white cat,  but we ended up liking her too much and kept her for ourselves and decided to go on the adventure of owning three cats.  It’s funny, if she had shown up just a few days earlier, we would have never gone to petsmart in search of cats and would have never gotten Chester and Jeeves! How sad!

This picture makes me bust out laughing every time I see it. She hadn’t grown her fluff yet so she looks like a little boy to me!

She likes to help me study

And she loves to help cook!

She was so happy to have a home.

//www.youtube.com/get_player
Here is a silly video of her the second day she was here. I let her in to visit and that’s when she discovered toilet paper.. To this day I can’t let her in the bathroom without this happening. (Ignore my annoying yelling)

I’ve never seen a cat capable of making such sad expressions before.
Hope your weekend is happier than Cloud in these pictures!