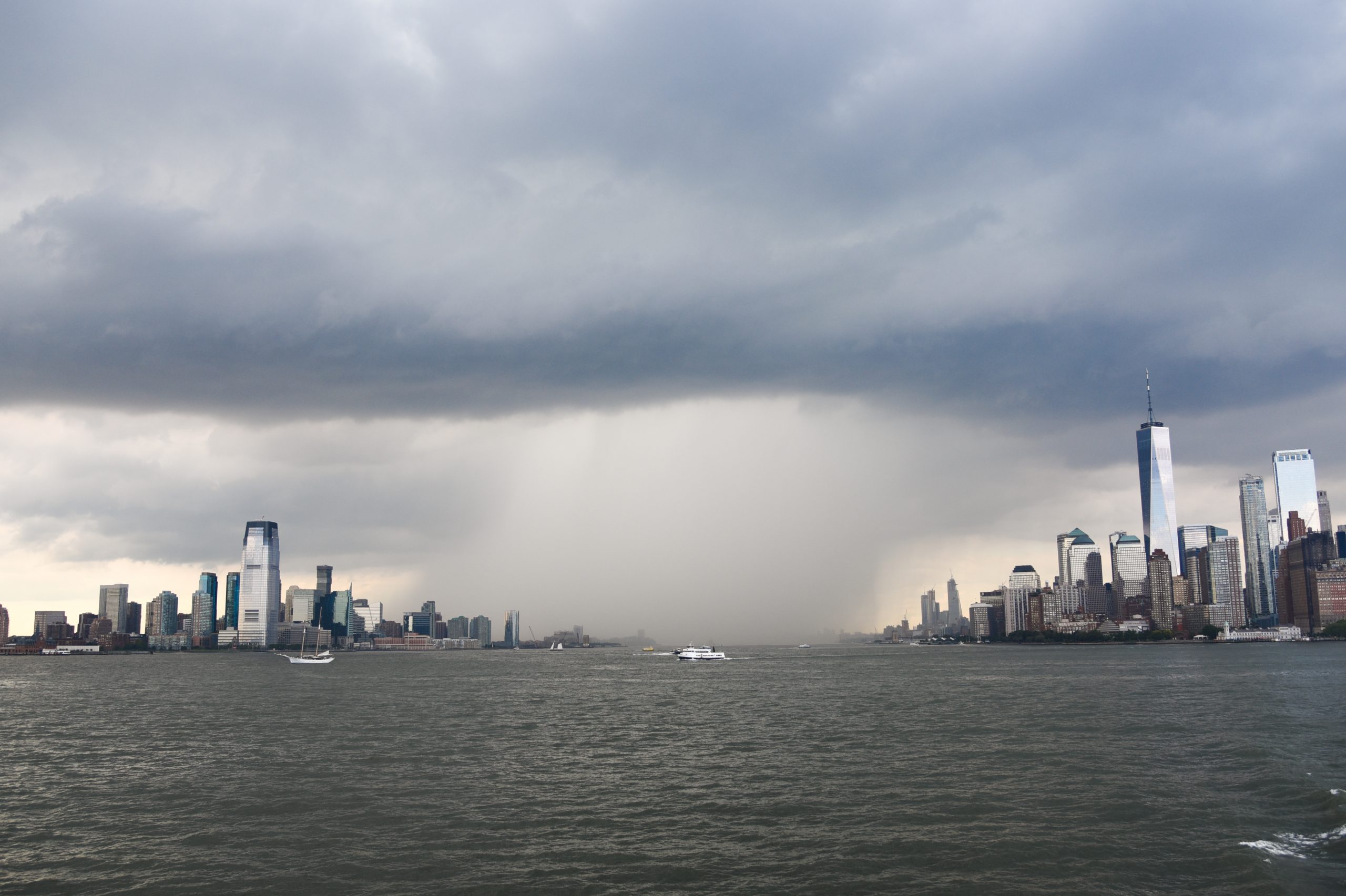 The first day my friend Alex and I spent wandering around New York City, the sky was dark, with storm clouds floating ominously above.

Our wandering led us to the very tip of Manhattan, where we boarded the free Staten Island Ferry to get a view of the city and to rest our feet.

And also to escape the rain!

The little storm made it’s way across Manhattan and over to Brooklyn, as we watched, safe under the cover of the ferry.

It was an incredible sight. What a perfect time to ride the ferry!

While in New York City for a few days last December, a visit to Central Park was something to check off our to do list. I hadn’t given the park much thought before visiting, but when we got there, it was a bit of a strange experience to stand someplace that has been so popular in countless TV shows and movies. It was hard to believe I was actually there.

One moment you are making your way through streets lined with skyscrapers so tall they block out the sun, while dodging mobs of people and crazy taxis. The next moment, you find yourself surrounded by trees and nature and feel like you have been instantly transported into another universe.

But before you can forget where you are, a quick glance up towards the sky, and the sunlight you forgot existed, reveals all the huge buildings towering up over the tree tops. It is a surreal sight.

My pictures may give a false illusion that the park was quite secluded, when really it was quite the opposite!  People were everywhere of course!

I found myself being very impressed with central park. The woodland landscape against the biggest buildings I have ever seen was a very picturesque sight.
We wandered around the park for a while, ate a pretzel from a street cart, took in the sights, and then got stopped by a man dressed as a monk who put bracelets on our wrists before we knew what was happening then tried to make us pay $20 each for them. We gave him one $5 and ran away. All in all, a pretty successful walk in Central Park.
Categories: Central Park, City, New York City, NYC, Vacation

This happened to be the coldest day of our December trip. The temperature never rose above freezing, and out on the windy water it was extremely frigid. It had snowed for a short time earlier in the day, and he lingering snow clouds made for a dramatic backdrop to the Statue of Liberty.

New York City is a crazy place, whose streets don’t slow down as the darkness falls. The bright, sparkling lights of the skyscrapers illuminate the streets for as far as the eye can see.

…And some areas grow even brighter as the sun goes down, hitting you with blinding lights as you turn the corner. Sometimes you forget that is isn’t the middle of the day!

(I love the giant towers of steam!)

But no matter how dark, or how late it got, I always felt very safe on these busy city streets, which is a lot more than I can say about my own city.

I love exploring this city, no matter what time of day!

I’ve always been a city child. The landscape of the countryside is pretty, but the wide open spaces, the lack of humans, and the absence of buildings, all makes me feel unsettled after a while. I had never given New York City much thought until recently, and when I visited, it seemed obvious that I would like it there.The city I live in only has a few skyscrapers, but I have always loved being downtown, nestled in between the tall buildings. So I felt quite at home, wandering the New York City streets, looking up, and admiring all the skyscrapers that put the ones in my city to shame.

A collection of random shots I took while wandering the streets of New York City. Most of the pictures I didn’t frame of even stop to think about. I just snapped away as I walked.

One of the many glorious city pigeons I saw!

My favorite thing about our visit was just roaming the streets and taking in all the sights. I love the crazy atmosphere of the city, where there’s always something new and exciting to see every street corner you turn down. Although I am not a very social person, I feel safe and secure in large crowds. I like how busy everybody is in NYC; nobody tries to talk to you and everyone seems to mind their own business. Because of that, it seemed a lot less stressful and scary than my own city. I miss New York.

I’d never spent much time thinking about New York City. But a few years ago I got the idea that I wanted to visit during Christmas time. And as the years went by, my desire to visit this city grew and grew until the next thing I knew, I was buying plane tickets this past November, to visit the city just a few weeks later.

The last time I had flown on a plane, I was four years old. All I remember is eating fig newtons and being in a cloud the whole time. For years I had convinced myself that I was afraid of flying, and vowed to never set foot on a plane. But eventually I realized that was silly because I love traveling and there are so many places I want to go. It’s been years since got over my fear, but still hadn’t actually flown anywhere, so it was time.

When the plane finally took off, after driving around on the runway for what felt like an inordinate amount of time, I was so freaked that I couldn’t bring myself to look out the window for at least half an hour! It was such a tiny plane, smaller than a train car, and when it turned all you could see was the ground. But I was so excited to go to NYC it helped to cancel out how freaked I was. We were only in the air a little over an hour before we landed, I couldn’t believe how fast we got there!

The next adventure was getting our subway pass at the airport, figuring out what bus to take to get to the subway, and then figuring how to navigate the subway to get to our hotel.

After the long subway ride from Laguardia to Canal street in lower Manhattan, we climbed up the steps and found ourselves directly across from our hotel. Success! I hadn’t gotten us lost.  I was pretty proud of myself for successfully navigating the way there, by car, plane, bus, train and foot!

We didn’t have any major plans when we got there; just to wander around and explore.

Our hotel was on the edge of Chinatown, which was a blast to explore.

We walked on the High Line, which had some great city views.

I got to see all the Christmas sights I had dreamed about, including the giant Christmas tree!

I finally got to try an authentic NY bagel that I’m still dreaming about. Also, our hotel was conveniently located close to a pizza place that sold $1 cheese slices, which I forgot to take a picture of. We tried out a few pizza places during our stay, but the $1 place called Joey Pepperoni was the best.  I looked it up a few nights ago when I was craving a slice, and it’s only an 8.5 hour drive from the house 🙂 WORTH IT.

We visited the World Trade Center and saw the memorial, plus this insane structure.

We saw all kinds of crazy skyscrapers, including this giant cube which is the tallest residential building in the world, and full of billionaires.

And we went to the top of 30 Rockefeller Center for a 360 degree view of the city.

I never expected NYC to be so much fun, and I am already dreaming of going back! My favorite part about the city is that you never know what your are going to see. Almost every time you turn a street corner you see something new, crazy or unexpected.

It’s a crazy city and I definitely recommend visiting it at least once in your life. I want to visit as many times as I can.